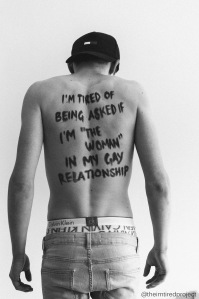 “Being what many people consider the more feminine one out of the two men in my relationship, I am sometimes asked if I am “the woman” in my relationship and my boyfriend is “the man”. I am tired of this question, and the very problematic attitude that it stems from, for two reasons:

“The first reason is that, by asking this question, someone is essentially suggesting that for a homosexual relationship to succeed it needs to be modeled on a heterosexual one, where one person identifies as a man and the other as a woman.

“The second reason is that, by thinking this is an acceptable question to ask, someone may also think – strangely – that it is acceptable to apply sexist attitudes to the relationship as well. For example, they may ask the so-called “woman” (and I have been asked this myself) if they will be “the one to stay at home and look after the children”, and if the so-called “man” will be “the one to go to work and earn the money”.

“I am not a woman, I am a man. The happy, long-term relationship I have shared with my boyfriend is not made up of a man and a woman, it is made up of two men. Gay men should be allowed to describe themselves and their relationships in exactly this way, without being expected by anyone to identify as anything else.”